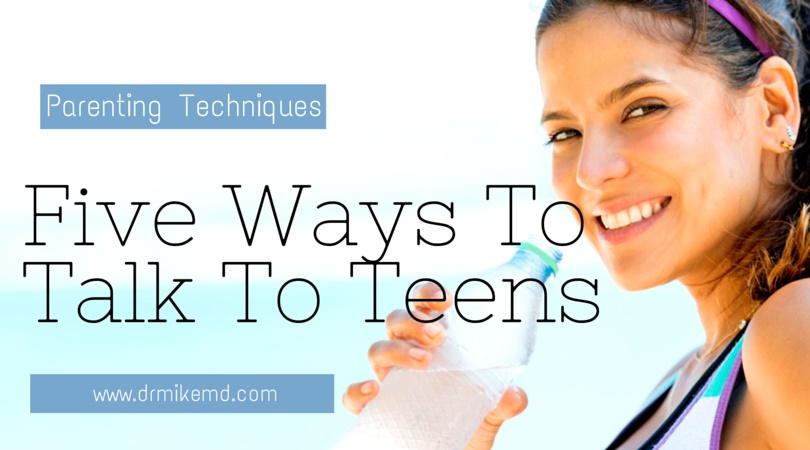 Learn to Better Communicate with Your Teenager

Some people will describe teenagers as a species all their own.  Teenagers’ bodies are so overrun by the hormones that are coursing through their veins that they can be difficult and irritable.  They can be emotionally driven and motivated to keep most adults out of their lives completely.  Teenagers can be very difficult to communicate with especially when it comes to talking about difficult subjects.  Difficult subjects do not have to be limited to drugs or alcohol.  When talking to a parent or guardian, a difficult subject for a teenager can be anything that he or she does not want to be talking about. But sometimes it is necessary to talk about things even if they are uncomfortable.

There are some things that you can do to make talking to your teenager a little easier on both of you and make the conversation more productive. Working on cultivating an atmosphere of open communication should be something that is ongoing.

One of the easiest ways to encourage open communication is to take an interest in what your teenager is saying or doing.  No one likes to feel as though they are being ignored.  You do not need to like everything that your teenager likes, but it is a good idea to be able have a natural conversation.  If you and your teenager are already having regular conversations about regular things than talking about more difficult subjects should be a little easier.

2. Don’t Let Your Emotions Get The Best Of You – Treat Them With Respect

Always treat your teenager with respect.  Even though he or she is likely to make mistakes and not treat you how you feel that you should be all the time, he or she should be treated with the respect and courtesy that you would give anyone else while still maintaining your authoritative energy.  One of the easiest ways to exhibit this courtesy is to knock before entering your teenager’s room.  It is also a good idea allow space for your teenager’s thoughts and opinions.  Even if you do not agree, it can be very helpful for him or her to have some space to explore his or her own perceptions of the world.

3. Encourage Problem Solving Rather Than Scorning

When it comes to talking to your teenager about difficult subjects like drugs, sex, death, or the law, it can be your first reaction, especially if your teenager has made some kind of mistake or cause d some kind of a problem, to ask some very loaded questions.  If you find that the first questions that come to mind start with “How could you…”, “What were you thinking…”, or “What is wrong with you…”, stop yourself.  These questions are not going to lead you to any of the places where open and constructive conversations are possible.  Instead, think about problem solving and ask what he or she plans to do to rectify the situation or be proactive so that it does not happen again.  Ask if he or she would like to run any of the potential ideas past you since talking things out often makes them easier to process.  Remember to avoid blaming so that the dialogue keeps flowing.

4. Always Listen With An Open Mind

If and when you move on to the brain storming or problem solving portion of the conversation, remember that that is what you are doing.  You are not meant to be pushing your opinions off on your teenager.  You are meant to be aiding him or her in making his or her own decisions.  Pointing out the negatives in the situation is not going to be productive either.  Make an effort to be positive and encouraging in your comments.  Offer helpful suggestions, but mostly listen.  Listen to your teenager while he or she works out the problem at hand.  Often, parents or guardians spend too much time talking and telling teenagers what they should be doing rather than giving the teenager the space to figure things out for him or herself.  If your teenager knows that he or she can expect a lecture or to be talked down to when there is a problem, he or she is unlikely to come to you for help when it is really needed.

All you really need to do to be able to foster better communication with your teenager is to stay calm.  Remember that you are talking to a person and not just your child.  He or she is capable of making decisions and figuring things out.  All of these steps will lead you to a more open and communicative relationships as your teenager grows into adulthood.